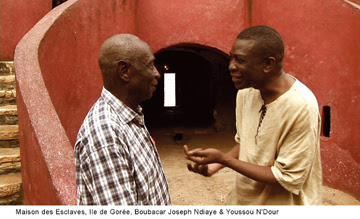 RETURN TO GOREE Film and Concert

A musical road movie, RETURN TO GOREE follows Senegalese singer Youssou N'Dour's historical journey tracing the trail left by enslaved Africans and the jazz music they invented. Youssou N'Dour's challenge is to bring back to Africa a jazz repertoire of his own songs to perform a concert in Goree, the island that today symbolizes the slave trade and stands to honor its victims. With Youssou N'Dour, Moncef Genoud, Joseph Ndiaye, Idris Muhammad, and Amiri Baraka among others.

In NAMES LIVE NOWHERE (Les Noms N'Habitent Nulle Part) - whose title is a Senegalese proverb - a griot (story teller) traveling from Dakar to Brussels weaves a tale about African expatriates and offers a candid look at the life of African immigrants in Belgium. With Sotigui Kouyate - a real life griot - as the story teller.

SOTIGUI KOUYATE, A MODERN GRIOT dresses the portrait of one of Africa's greatest actor (1936-2010). From Africa to Europe, the film unveils the multiple facets of Sotigui Kouyate, actor, musician and modern griot.